I've tried to talk to Trump supporters reasonably, even when they insult me and call me names, because they are following the example of their leader. If it were any other of the presidents that have sat in the Oval Office, I would just let it all go, because in four years a change could be made, and injustices would be dealt with - but this time I wonder if that's possible, if things perhaps have gone too far.
I think Trump voters/supporters have been stirred into a frenzy like sharks when chum is tossed in the water - but when the feeding frenzy is over, they will be horrified to find that they've cannibalized their own freedom, as well as that of their compatriots.
I also think they are eventually going to feel like all the contractors, employees and others Trump stiffed; like the students of Trump university he scammed; like the wives he cheated on; like the allies he betrayed; like the majority of American citizens he betrayed. They are going to be beyond disappointed and horrified when they find that he targeted them for their desperation to find a leader to believe in as well as their gullibility to believe his patriotic propaganda, which made them highly vulnerable to his con.  His base doesn't realize how deeply they've been insulted - much less how deeply they've been wounded - and may never understand, because Trump's propaganda machine is just that effective.  Americans have been dealt a tremendous blow while watching a gruesomely fascinating smoke and mirrors show in a den where lies have been used to numb us while a thousand cuts have slashed our democracy and left it bleeding.

Posted by Terri DelCampo at 5:50 AM No comments:

US Democracy in Jeopardy

The Russians landed planes and troops in Venezuela on Monday, March 25th, 2019. They received a 'rebuke' from the United States.   Venezuela is about 1700 miles from Florida. The range for an ICBM is 5000 miles.


And the President of the United States does virtually nothing.


When the Russians planted missiles in Cuba in 1962, President Kennedy recognized the threat to our national security and did more than 'rebuke' Krushchev. He stood toe to toe with him for 13 days until Russia removed the damned missiles.


Does anyone realize the nuclear threat here? The threat of invasion? Does anyone care that the Trump administration has apparently sold out our democracy?


And where the hell is the media? The only reports I see about this act of aggression are from the BBC and the Wall Street Journal.


We don't need the Mueller report; we only need to open our eyes. Trump is setting our country up for his Kleptocracy, with Russian backing.  It's obvious. It's imminent. What the hell happened to the United States making the world safe for democracy? What happened to making our country safe for democracy? Apparently Americans are too busy squabbling to open their eyes and see the evidence of collusion.  No loyal American president would allow Russia to invade Venezuela, so close to the US.


Wake the hell up, Americans. All the rest of Trump's crimes pale in comparison to this treason. And many of those crimes are tied to it. He's been beholden to Russia for decades.  And he proved that when he kissed Putin's ass in front of the whole world in Helsinki.


Trump belongs to the Russian mob, which controls the Russian government. And he is taking over our country with their help. They bailed him out of bankruptcy in the late 1980s, and because of that we now have a compromised president who is selling out our democracy. We have a crime syndicate in the White House posing as our government.


"House of Trump, House of Putin" by Craig Unger


"View from Flyover Country" by Sarah Kendzior
Posted by Terri DelCampo at 5:43 AM No comments:

What if I told you... fake news

What if I told you that "Fake News" is a propaganda campaign dreamed up by Robert Mercer who was hired by Trump to confuse Americans and distract them from legitimate investigative journalism exposing Trump's criminal and immoral past?
Posted by Terri DelCampo at 6:06 AM No comments:

No caging babies!!!! WTF is wrong with the US?

Donald Trump and Jeff Sessions and the entire US is responsible for this and it's inhuman!  Anyone who supports this is a piece of rancid shit. 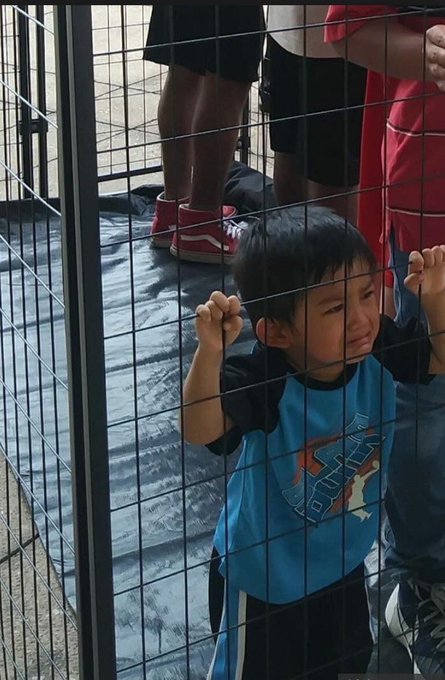 Posted by Terri DelCampo at 6:06 AM No comments:

Obama VS the current Fake POTUS

There was a post about the Republicans shutting down Obama at every turn, and lying about him constantly.  And then it went on to say that the author of the post would treat Trump the same way and I realized I agreed with every word, because I have been reading about Trump and his entire family from journalists and writers who supply our country with facts and always have. Who have Pulitzer prizes and journalistic awards for their objectivity, honesty, dignity, and integrity.  I've come to the conclusion that Trump shouts fake news at the top of his lungs because he has never had any of those qualities - they are not in his narcisstic nature, and neither was he reared with them.  Here is my reply to that post:

Obama had more American ethic and class under his fingernails than the entire Trump family has, all the way back to the immigrant grandparents who were racist swindlers right from their arrival. Trump is a filthy smudge in the history books, hopefully a small one.

And for all you Trump supporters and Obama detractors, read a book once in awhile instead of right wing blogs masquerading as news sources. Start with this one by Pulitzer Prize-winning David Cay Johnston:  "It's Even Worse Than You Think: What the Trump Administration is Doing to America."  I'm not even half through it and I want to throw up.  And just for the record, I don't really care who agrees with me.  Trump's campaign was propaganda and filled with lies. He distracted everyone with his opponent's flaws conveniently omitting the fact that he committed the same crimes, and many, many worse crimes all through his past and present.  His administration continuously violates the emolument clauses of the constitution.  He's turned the presidency of the United States into a racket, and he's snookered the American people into believing that reliable, ethical news sources are fake.

The only fake thing in this country is Trump.  He's a thief.  He steals from average Americans - there are court orders and public records to prove it.  He's a liar - he's used illegal immigrants in the construction of his buildings because they would work under any conditions (he didn't supply safety equipment) because they couldn't complain - and then he stiffed them their $4 an hour pay because he could get away with it.

He is a piece of garbage who abuses his presidential powers at every turn. He does nothing that isn't self-serving.  He is rich, white, racist, hateful, petty, vengeful,  piece of trash and a disgrace to the human race.  And as soon as I'm finished posting this, I will Tweet it directly to him. See if he calls me a liar and watch me shut him down with the facts.

Posted by Terri DelCampo at 4:45 AM No comments: 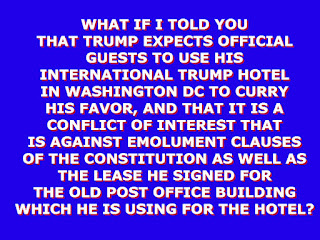 Posted by Terri DelCampo at 6:34 PM No comments:

Has anyone thought about why Trump would be considering pardoning himself if he wasn't guilty and knew it?  And why he's been casting doubt on legitimate news organizations since he started campaigning?  Perhaps because if Americans are confused and doubtful enough of the FREE PRESS, they won't believe it when his past crimes and immoral acts are unearthed?


I'm reading a couple of different books about Trump right now.  They are by Pulitzer Prize-winning journalists whose reputations are impeccable.  More importantly, being professional journalists, they back up their stories with facts – court documentation, public records.  They do not publish fake news.


He's in violation of the Emolument clauses of the constitution (which forbid the president from using his office for money-making) because he's conducting meetings and encouraging, (actually brow-beating) foreign dignitaries to use Trump International Hotel in DC which means he's profiting from his position as president.  He secured patents for his daughter's clothing line when he met with Chinese dignitaries.  The lease for the Old Post Office building he changed into Trump International Hotel expressly forbids a political office-holder from profiting from the building's use.  He doubled the fees for membership at Mar-A-Lago to $200,000 once he was president.


Every time Trump goes to Mar-a-Lago it costs the taxpayers about 3 million dollars (Not just Air Force One, but also a C-130 to transport his limo and entourage).  And he has the nerve to charge the Secret Service for their accommodations at Mar-a-Lago – everything from their rooms, to meals, to the golf carts they use to follow him around the course).


He's trying to limit the free press in their investigative reports because he has a lot to hide.  Like stiffing multiple companies that have done work in his buildings and on his golf courses.  That is not fake news, the information is documented and there are court orders forcing him to pay.


It's time to wake up and admit that this president is a con-artist, a thief, and a fraud, not to mention seriously unstable.  He's trying to discredit the very institutions that can warn us about government corruption before it has a chance to get a stranglehold on the country.


Please, open your eyes.  It wasn't just uneducated people who voted for this criminal.  It was the very wealthy, very shady characters who knew they would be protected by this corrupt administration.


Respectfully, America, wake up, for our country is in trouble.  Seriously.

Posted by Terri DelCampo at 5:16 AM No comments:

Find all of Terri DelCampo's books on Amazon! 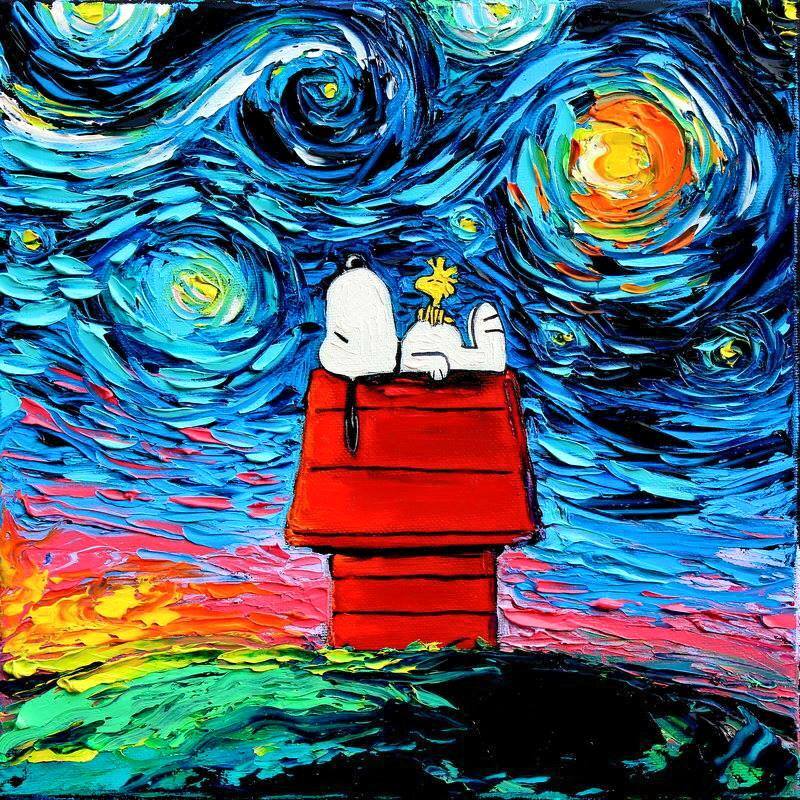 Blaze and Me - Getting hitched! 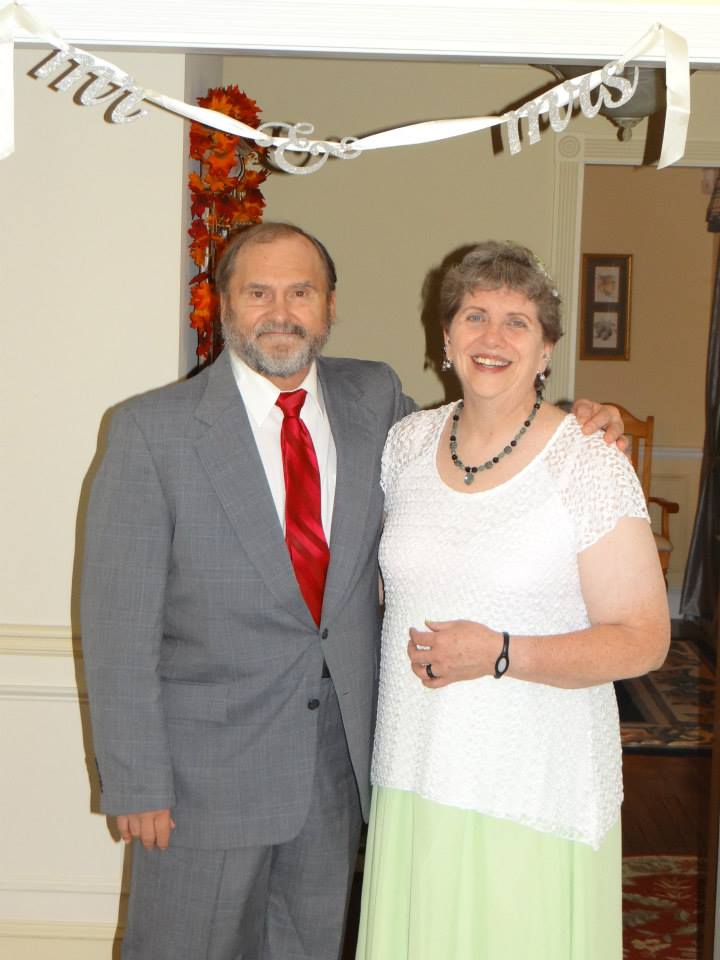 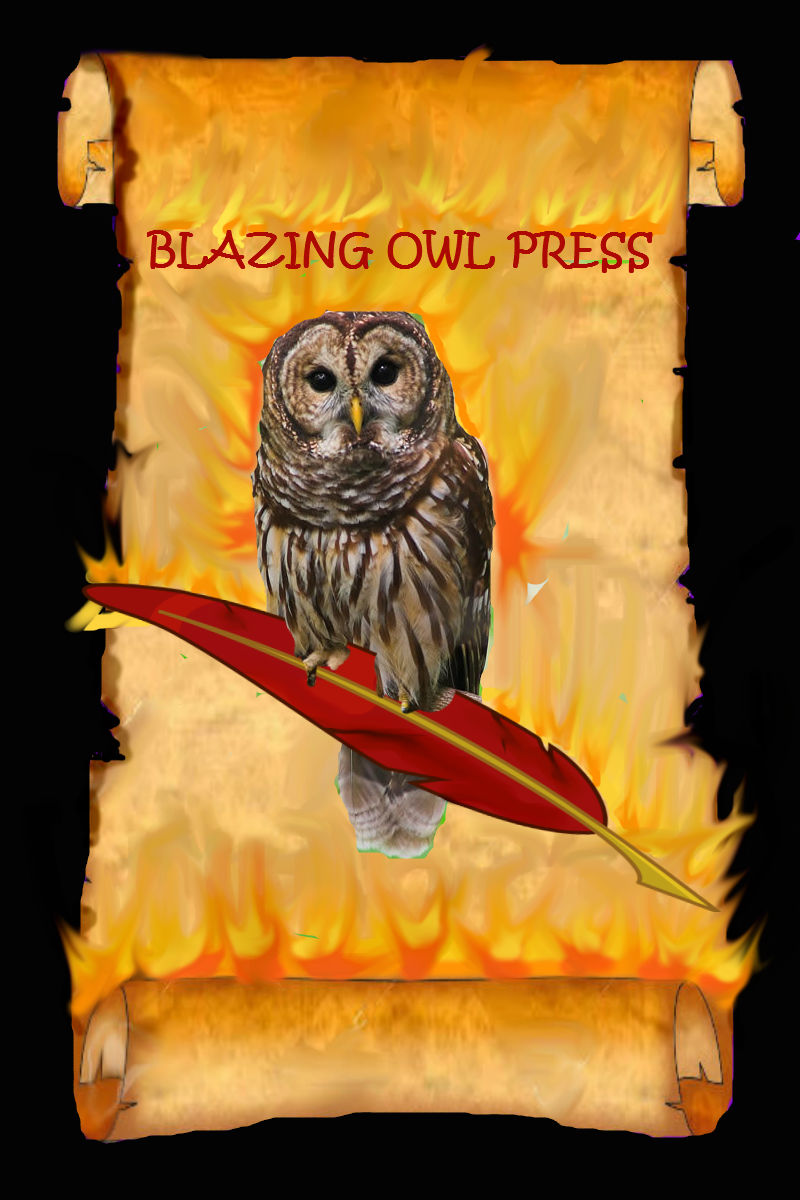 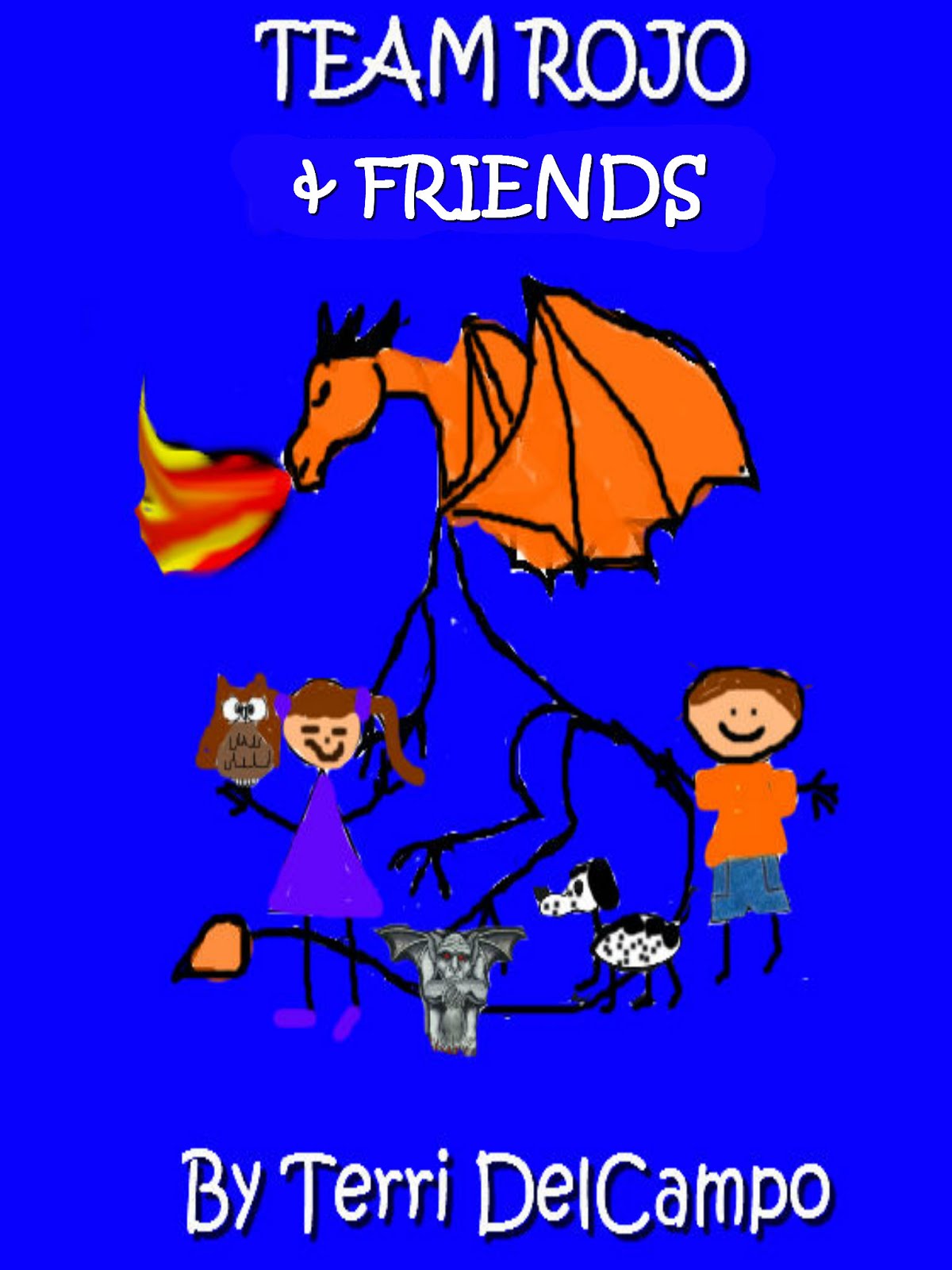 Team RoJo, Kid Joey, Princess Rosie, and all their friends are waiting for you!